Get the Latest Blog Updates 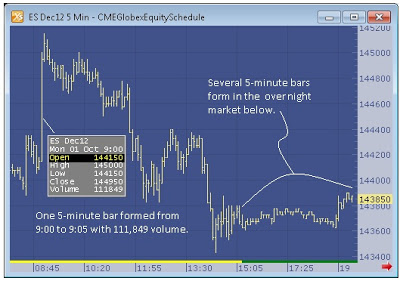 Note: If you’re not familiar with X_STUDY®, I encourage you to review the X_STUDY materials on our website. You’ll gain a solid understanding of this trader-centric charting application, which is fully integrated with TT’s X_TRADER® platform and provided to all X_TRADER users at no additional cost.

A Case for Constant Volume Bars

A constant volume bar conforms to the market’s tempo. As the market tempo slows, so will the formation of new bars. As the tempo increases, so will the number of bars created. Volume bars are ideal for when events happen in the marketplace, too. For example, the release of an economic event at 1:15 can leave your five-minute bar waiting until 1:20, while the volume bars have already created four new bars in that five-minute window. These four faster-responding volume bars give your strategy more opportunity to react to the event that has just occurred in the market.

Likewise, who needs 12 five-minute bars from 12:15 to 1:15 before that economic number comes out when volume is light? Your analytics will be flat with time-based bars and won’t be able to help you make decisions. A volume chart in this same period might only form one bar. The concept of constant volume bars creates an intelligent bar that reacts to the market’s trading volume.

Let’s look at the scenario below, which uses the ES Dec12 contract from earlier this month. Compare a five-minute chart to a 20,000-volume chart. It will show advantages for when markets have both a fast and slow tempo. The five-minute bar chart shows a one-bar spike in the morning hours. The 9:00 to 9:05 a.m. bar in ES spikes to 1450.00. Comparing this bar to the 20,000-volume chart, we can see that approximately 5½ bars were formed on the constant volume bar chart during the same time.

Now look at the overnight market above. Here we can see more than forty bars have formed on the five-minute bar chart. This many bars will cause most technical indicators to flatten out and any automated system to start generating false signals, especially if the technical indicators are using fast values like a simple moving average of six bars. (I actually do not display all the bars here; there are more off to the right of the chart. You can tell this by the little red arrow at the bottom of the five-minute chart.) 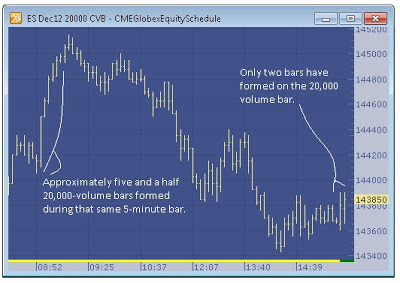 The 20,000-volume bar has only produced two bars, with the second one still incomplete. At the time of the screenshot, the bar was only half complete, with around 11,000 volume. This example illustrates the improvement constant volume bars provide in both fast- and slow-moving markets.

In my experience, I’ve found that constant volume bars can really improve analytics and help eliminate some of the whipsaws.This isn’t to say time-based charts are unnecessary. In fact, I myself still use time-based charts in much of my analysis. I don’t think I could give up daily charts; they are just too ingrained in my analysis. Rather, I’m simply suggesting that you might gain a little edge by looking at a combination of volume-based and time-based charts.Until next time, plan the trade and trade the plan.

Swaps: They’re in Our Future

More than two years after the Dodd–Frank Act was passed, it’s surprising how much still remains unsettled with regard to what new regulations may be implemented and how the industry will be transformed. One of the few changes that seems certain is that over-the-counter (OTC) swaps will move to a centrally cleared model.

What remains to be seen is which model for trading and clearing interest rate swaps will ultimately win out. Will these swaps remain custom OTC contracts traded via a swap execution facility (SEF)? Or will the industry move toward an exchange model where swap-like futures are traded on a designated contract market?

It seems more and more as if the futures model will ultimately win out. Exchange-traded interest rate swap futures have margin efficiencies that the OTC model can’t match. A number of strategies that make use of OTC swaps today may no longer be profitable once these swap positions are subject to margin requirements, an issue which the substitution of swap futures for OTC contracts substantially alleviates.

The trend toward either the “swaps as futures” or “futures on swaps” model is noted by research firms such as TABB Group, but is also reinforced by moves the exchanges are making. For example, the Chicago Mercantile Exchange (CME) recently announced plans to list deliverable interest rate swap futures, and IntercontinentalExchange (ICE) is transitioning its OTC energy contracts to futures.

For these reasons, I was very excited last month when we announced our plans to provide connectivity to Eris Exchange. Eris has created products that capture the best of both worlds. Eris contracts are futures, which means they bring with them margin requirements substantially lower than comparable OTC contracts—up to 95 percent lower for accounts with highly correlated positions. At the same time, Eris products are designed to replicate the cash flows of OTC swaps while also allowing for custom coupons, effective dates and maturity dates to be specified, giving firms the ability to tailor the contracts precisely to their needs.

In addition to being an effective vehicle for corporations to hedge their business risks, a number of strategies based on Eris futures can be executed using TT’s suite of server-side execution tools, such as the Autospreader® Strategy Engine (Autospreader SE) or the new ADL™ visual programming platform with Algo Strategy Engine (Algo SE). These include:

For more information, visit the Eris Exchange page on our website and read the recent news release announcing our plans to connect to Eris.

And if you’ll be attending FIA Expo later this month in Chicago, stop by our booth (#820) on Wednesday, October 31 at 3:30 p.m. to learn more about Eris futures and how you can trade Eris with TT. Free passes to the exhibit hall, compliments of TT, are available here.

Hope to see you at the show!

The Pace of Innovation at TT

This post probably isn’t what you think it is. This is not a story about how innovative TT has been over recent years or a recollection of the countless examples of cutting-edge software we’ve been delivering. Yes, we’ve released some great apps over the last half decade, truly innovative ones at that. Since this past Spring alone, we’ve launched our low-latency TT API, staged order functionality, and ADL™, to name a few, and with products like MultiBroker ASP on the horizon, there’s more to come. And we shouldn’t underestimate the tremendous amount of effort and expertise that’s been put toward making our platform the industry’s most stable and reliable—work that is critical but not always obvious.
END_OF_DOCUMENT_TOKEN_TO_BE_REPLACED

Can Any Trader Learn to Code?

Back in 2010, Wired columnist Clive Thompson argued that it’s time for all of us—not just software engineers—to learn how to program software1. It’s been nearly two years since that article was written, but I believe it’s still as relevant today as it was then.

As the product manager responsible for TT’s ADL™ visual programming platform, people often ask me if I think traders can learn to code. I tell them, not only can any trader learn to code, but most traders are already engaged in the mental process of writing a program, whether they know it or not.

As an example, consider a successful point-and-click trader who has a rock-star track record. This trader must know his strategy inside-out and execute it with precision. To be specific, he must have the “pathways” of his strategy mapped out, and, if needed, he should be able to articulate them in an organized and systematic manner.

What makes this trader exceptional, however, is not only the fact that his strategy map depicts the main pathways of logic, but that it also covers the inconspicuous “alleys” or contingencies that can arise in the market. The most successful traders consider the “what ifs” and are prepared with maneuvers to deal with such contingencies.

END_OF_DOCUMENT_TOKEN_TO_BE_REPLACED

Order Staging for the Buy Side

By way of introduction, my role at TT has involved me in a number of strategic initiatives including proximity trading, synthetic orders, Financial Information eXchange (FIX) protocol and application programming interfaces (APIs).

Most recently I’ve been holding discussions with a variety of firms to further enhance the capabilities of our system for buy-side traders and portfolio managers. In this role, I’ve had the pleasure of speaking with some key players in the buy-side community.

Of course, the term “buy side” itself refers to a fairly wide swath of business models, ranging from asset managers to hedge funds. But despite the breadth of the buy side as a whole, a growing number of buy-side users is demanding the option of a high-touch capability in a world otherwise driven toward low-latency, low-touch trading.

All the World’s a Stage

Order staging, which involves the creation of staged or “care” orders, is in some ways an idea that’s as old as agency trading itself. Although they weren’t called care orders at first, care orders started as a voice call to a sell-side trader over telephones and squawk boxes. As technology marched forward, the vehicles for submitting care orders evolved to include faxes, followed by emails and instant messages.