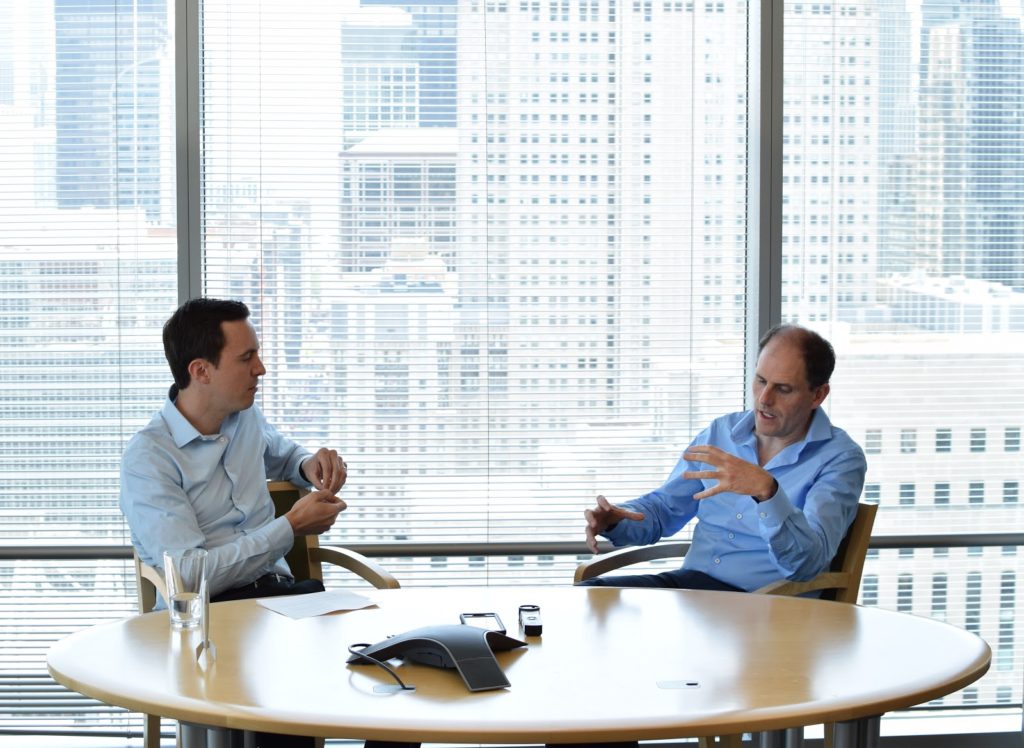 Like many others, the first book I read upon entering the industry was Jack Schwager’s Market Wizards. It was—and still is—largely considered required reading for anyone looking to enter capital markets, and it’s fair to say that Mr. Schwager’s book had a lasting impact on my understanding of what makes the best traders tick.

This leads me to today’s blog post, which introduces a new Trade Talk series titled, “Wizards of Today’s Markets.” In this series, I sit down with highly accomplished traders to get an understanding of who they are and how they achieved lasting success in an often unforgiving business.

While much of the conversation revolves around trading, other topics explored include cryptocurrencies, regulation, market structure, emerging technologies and more. The series is presented as direct transcripts of those conversations, edited for readability. If you have suggestions for future interviewees for this series, please email us.

With a tip of the cap to, and permission from, Mr. Schwager, I hope you enjoy our first edition, which features Don Wilson, Founder and CEO of DRW.

Most of our readers will know you and your background, but for those who don’t, how did you get started in the industry?

Don: I went to University of Chicago for undergrad, and because I was in Chicago, I had some exposure to the industry, and I decided when I graduated that this was what I wanted to do. I was interested in science in general when I started college. And then, as I spent a little bit of time there, I actually decided that I liked using math to solve problems. What intrigued me about this was the fact that you can use math to solve problems in financial markets, and you get much more real-time feedback than in a more academic setting.

The ability to see the results of decisions you make is faster in this industry than probably anywhere else.

Don: Yeah. So I was really drawn by that, and when I graduated, I walked the halls and handed out resumes and, eventually, I was hired by a firm called LETCO, which was a CBOE-based firm primarily. I started working for them in January of ’89, having graduated in December. Then, in October of ’89, I went into the Eurodollar options pit, and had an account at 1st Options with $100,000 in it. I stood in the pit during the day, and then I’d go home at night and write software, build models. I was writing code in Pascal, and I had a Macintosh computer, you know, like an SE, little box.

Code that simply did options P&L calculations and stuff like that?

Don: Yeah, it was the code that produced the sheets and then the stuff to do the risk management.

How long were you doing that? How long before you formed what became DRW?

Don: So it was ’92 when I started DRW officially, which was not a big transition. Still stood around the Eurodollar options pit and traded.

How big was it initially? Was it just you?

Don: It was me. I had another guy in the pit, and a couple clerks.

So obviously technology’s a passion of mine; I work at a tech company. I’m curious: you said you started with Pascal. How much of that coding influenced DRW becoming a driver of technology in the industry?

Don: One of the things that I think differentiated me in the pit at the time, was I was one of the few people that was, on one hand, standing in the pit and trading, but then also was doing financial modeling and coding and leveraging computers. So that combination of risk management, technology and quantitative research is something that very early on differentiated me from a lot of people. And that was the core of what we tried to focus on at DRW, and I was a little bit unusual in that I could do all three of those things. What I tried to do was get people with those different skill sets to work together as a team and figure out ways of doing things better. That’s still a really important part of what DRW is.

Have you had to work at sort of fostering that tech culture? We compete with you guys from a recruiting and hiring standpoint, and, in fact, I’ve flown to New York and the Bay Area, and I see kids with DRW backpacks on. I’ll ask them, “Where’d you go to school?” “Stanford.” I mean, you guys have blanketed the top tech schools in the country. Is that something you really had to work at? Do you credit a lot of your early tech leadership in helping foster that culture here? That’s not an easy thing to create.

Don: I think to be successful in this industry, you have to leverage tech. And in order to do that, you need to hire the right people and have the right kind of recruiting infrastructure.

Easier said than done, though. I mean, it’s a testament to what you guys have done, because DRW has consistently been a top destination. Making it sexy and exciting is often, in capital markets, orthogonal to the things that a lot of these kids are coming to do when they get out of a place like, say, Stanford or MIT. Anyway, it’s impressive.

So speaking of your personnel and the company as a whole, you guys have expanded obviously, in the last 10, 15 years, pretty considerably from those early days in Chicago, with over 700 employees globally. Can you talk a little bit about that expansion? Has it been based on markets you’re looking to trade and other asset classes that you’re getting into? Or what’s driven that expansion?

Don: So most of our expansion has been organic, and kind of growing what we do into additional markets. But we’ve also expanded the ways in which we trade. So traditionally, we were focused on providing liquidity, standing in the Eurodollar option pit, but also putting on positions that have positive expected value around the liquidity-providing framework. And as we expanded, some of our business units were just focused on taking risk, not providing liquidity—putting on positions that we think have positive expected value, managing variance around them, holding them. And then, at the other end of the spectrum, the more latency-sensitive trading side of things, leveraging technology to be competitive. The expansion was broadening out into those other styles of trading. And then, some of the expansion is expanding into additional products.

We did two acquisitions along the way. One was at the beginning of 2013 when we acquired Vigilant Global, which is a Canadian firm focused on latency-sensitive trading and technology, and then in January of 2015 when we added the assets of Chopper Trading, which was, again, in the more latency-sensitive business.

So technology certainly plays a role with respect to market structure. And I’m curious—market structure, I think, globally, has been under the microscope the last few years across all asset classes, but specifically U.S. Treasuries in the last 15-18 months. It’s been a hot topic in Washington. I’m curious what your thoughts are, both on what you think the end game will be—let’s stick with U.S. Treasuries—and potentially any changes there. But also—everyone is pretty focused on this—what do you think the role of regulation should be vis-à-vis market structure? Where do you see this all going?

Don: In the wake of the financial crisis, regulators have obviously been focused on reducing risk in the system, reducing the probability of a large bank failing—and there have been a number of pieces of legislation or rules that have been put in place to do that. Dodd-Frank, and specifically the derivative sections of that, is one focus; and the others, the Volcker Rule, Basel III and all the leverage ratios. So that combination of regulation is having a profound impact on the way the market functions.

And in general, what you’re seeing is that risk is being squeezed out of banks. Obviously the Volcker Rule is saying, “We don’t want banks to trade for their own account, unless they’re servicing the customer.” So that’s a very clear example. The impact of Basel III, and all the leverage ratio discussion, is that it’s more expensive for banks to carry positions. They now need a higher return of capital to justify some of the risk-taking businesses, and in many cases, they’re just exiting them because they no longer make sense.

In the derivatives section of Dodd-Frank, the main focus is moving the OTC derivatives into a clearing house, so that there is more transparency and people actually have to put up margin and variation margin. The combination of all of those things is reducing the amount of risk-taking capacity that the traditional market participants have. And so when there’s a dislocation in the market, for whatever reason, the number of people that want to come in and put on positions, taking the other side of it, taking risk, has dwindled. So you’re going to have more volatile moves. You’re going to have the market moving in ways that it historically hasn’t, and you can wring your hands about it and start talking about what’s happened to our market structure, but I think it’s pretty easy to see: we’ve squeezed the risk-taking appetite and ability out of the best capitalized financial market participants, and so of course there are firms like DRW that, in some cases, are stepping in to take up some of that, but capacity is dramatically diminished.

We’ve heard of the October 15 flash crash, and obviously the flash crash of 2010, but what struck me is that at a New York Fed conference, they showed a chart of the number of flash events since October 15, 2015, and not only were there, I think, hundreds, but the frequency was increasing in all asset classes—FX, equities—and this is only going to continue to increase, particularly as liquidity stays diminished.

Don: Yeah, I think it’s something that’s here to stay.

So moving on from rates trading—obviously you guys have a big role in that—but I’m curious: what other lines of business is DRW into?

Don: Yeah, we trade pretty much all asset classes. We’re bigger in some than others, but rates are the biggest part of our business, and we’re also large participants in energy.

How about outside of trading? I know you guys have been branching out from your traditional business.

Don: We do have a real estate division now, which we added after the financial crisis. We saw some opportunities to buy distressed properties, and so we put together a team to do that starting in 2009, and we’re also doing some fintech investing as well.

For the second half of this interview, see Wizards of Today’s Markets: Don Wilson, DRW, Part 2.