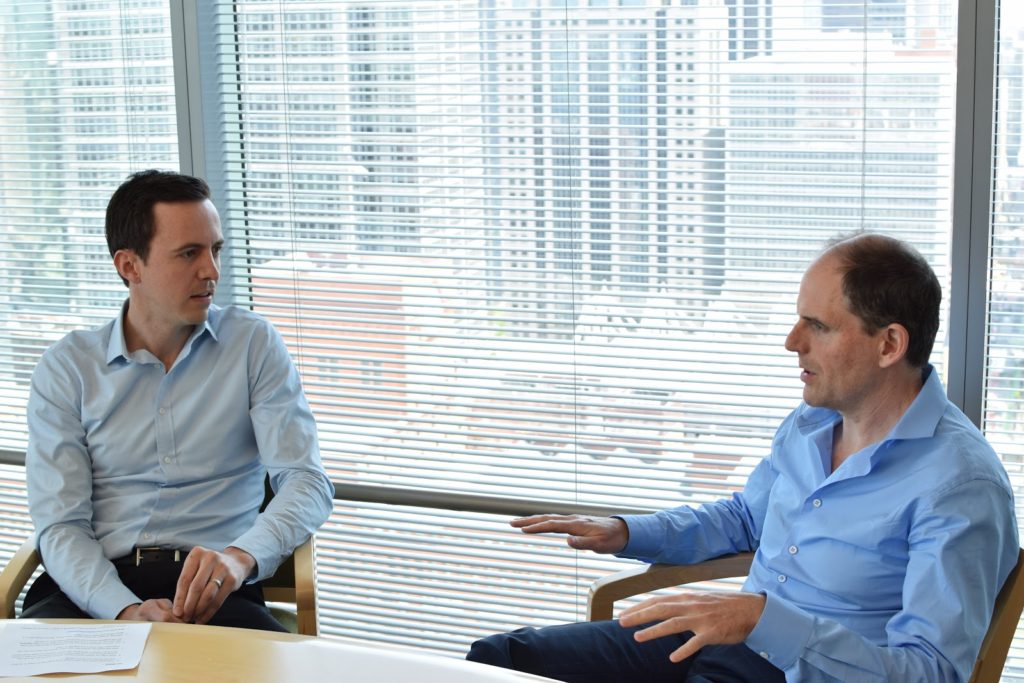 For part 1 of this interview between our CEO, Rick Lane, and the Founder and CEO of DRW, Don Wilson, see Wizards of Today’s Markets: Don Wilson, DRW, Part 1.

What are your thoughts on fintech in general? Most people, when they talk about fintech, they’re not talking about our little niche of the world—professional trading and capital markets—they’re generally speaking about disrupting payments, financial advisors and things like that. What do you usually look for? Are you looking for the more disruptive technologies? Or things that maybe tie back to what you guys do as your core business?

Don: For the most part, we’re interested in things that have some relationship to our core business, and it could be a cyber-security solution, where we can really vet it, and we’ll become customer of it, or it could be something that’s trading-related. The general theme is there are lots of new technologies that have been developed that you can now apply to new spaces, and there are lots of opportunities to create efficiencies.

One of which, Digital Asset Holdings, I’m curious, what’s the latest?

Don: Digital Asset Holdings is an example of where we were not just an investor, but we actually were a founder of the business, and that’s a great example of the type of innovation and thinking that we encourage at DRW. There were a couple of people at DRW who were early bitcoin proponents and we kept having discussions about why bitcoin is important. Why is it going to change the world? What is the opportunity? And so we said, okay, we’ll start off by providing liquidity. It’s something we do anyway.

We continued the dialogue, and eventually we decided that the most interesting thing about bitcoin is the blockchain itself and the distributed ledger. So we partnered with Sunil Hirani—he is in New York and runs trueEX. We launched a company that focused on leveraging the blockchain and other distributed databases to make the settlement of financial instruments more efficient. We didn’t exactly know where we were going to go, but we knew that there was a big opportunity. Two people at DRW became the first employees of Digital Asset, we seeded the company and started hiring others. It was pretty funny, because at first, as Sunil and I went around and talked to the banks about what we were doing, they looked at us like we were crazy.

Then we hired Blythe Masters, who has done just a phenomenal job growing the company. Within months people were saying, “Wow! We understand we need to be involved.” Digital Asset did the big capital raise in January, all purely with strategic investors, and now the company is a very different company than when we started it.

Interesting. Going back just a quick second…when you guys decided, “Hey, let’s start dabbling in making markets and providing liquidity to bitcoin,” was the infrastructure there for you to employ some of the same technology that you have for the more mature markets?

Don: No. I mean, it was actually a very painful process.

Don: The back office issues around it: if you do a bitcoin trade, on the one hand wiring dollars and on the other hand exchanging bitcoin. And because the timing is so different; the bitcoin is going to be transferred almost instantaneously, while dollars, depending on where you’re wiring the money to, could take more than a day.

I’m sure they’re also clamoring for an exchange—I think I read something, even in the last few weeks, “is Nasdaq going to list bitcoin futures?”

Don: Yeah, there have been a variety of exchanges that have dabbled in launching a bitcoin futures contract, I think that this gets to the question of, “Is bitcoin a kind of store of value that’s here to stay?” and I mean, bitcoin has done very well.

It’s weathered a lot of skepticism. Switching gears a little bit, what is the latest with GreenKey, another DRW investment?

Don: GreenKey is an example of a technology that we were an early guinea pig of, so to speak. I think that’s one of many examples where you can leverage a new technology to do something much more efficiently.

And they seem to be broadening their charter a bit. The first time I had a conversation with them, it was purely disrupting the physical turret. Now they’re taking a lot of those technologies that they were using in this very compliance-heavy world of transcribing voice and applying it to other types of communication media. You’re seeing a rise of interest in the Symphonies of the world, and applying these fairly archaic technologies: IM, chat, telephones, and making them continue to be relevant in our space, which has been so dominated by technology.

Don: Yeah. And with compliance-related technology, much of it is dated, so Green Key and others are making sure that aspect of trading keeps pace.

Well, the last question I’ll ask: probably a lot of people don’t know how passionate and involved you are with the sailing community, and I’m curious, you’ve obviously been a big factor in driving the America’s Cup World Series to Chicago. Trading markets and sailing kind of seem like fairly far-apart interests. Are there similarities and parallels that you draw between them, and do they both scratch the same itch, so to speak?

Don: Believe it or not, there are a lot of similarities in the type of racing that goes on in the America’s Cup today and trading. Historically, if you did a sailboat race, it took hours and you probably went from one place to another. But in the match racing that I do, a race typically takes 12 to 15 minutes, and during that period, you make hundreds of strategic decisions, and weigh risk and reward along the way numerous times. You’re dealing with lots of things that you can control, and you’re dealing with lots of things that you can’t control.

Is it fair to say—and I’m not a sailor as most boats I’ve been on have motors on them—that for the short races, it’s similar to position trading in the sense that you probably have a game plan that’s an overarching strategy, but you have to adjust and trade around your position, so to speak?

Don: Absolutely, you have a game plan based on what you think the wind is doing, and which side of the course you think is more favored, but you have to adjust based on what your competitor does, and how the wind changes, and what you’re seeing. It’s a constant review of risk versus reward.

I enjoyed the process of getting to know more about Don, and gaining insights into what it takes to thrive in our industry. On behalf of all of us at TT, I’d like to thank Don for taking time to speak with us.