The following blocks can be designated as a user-defined variable:

Note: The value of a user-defined Instrument Block cannot be altered while the algorithm is running; it must be set prior to the launch of the algorithm.

Recommended Tutorials For This Section

For a tactile learning experience, please try the following tutorial:

When a block is designated as a user-defined variable, its information appears as a new entry in the Variables Tab of the Information Panel, allowing the user to reconfigure the name, value, type, and the description of the variable.

How to designate a block as a variable

Right-click on the block and navigate to the option "Variable." Under the option, several types of variables available for the respective block will be displayed. Upon a selection, a check mark will appear to the left of the selected variable type, indicating that the block has been designated as a variable.

Example: Designating a Constant Number Block as a User-Defined Variable 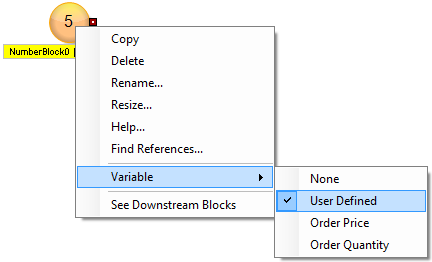 The Variables Tab in the Information Panel enables the user to quickly view and reconfigure the following aspects of a variable:

Note: Variables can be rearranged using the drag-and-drop method. After deployment, the order of the variables is reflected within the Algo Dashboard window, Parent Order Book window, and Algo Variables dialog within X_TRADER.