Whenever a trading block (such as an Order Block) submits an order, it retains an Order Key unique to that particular order. The trading block may then output a discrete event message

which will carry the Order Key. A Single Order Container may receive the

message, and then extract the Order Key to take control of the identified order.

Double-click on the respective Multiplexer Block to bring up an edit window: 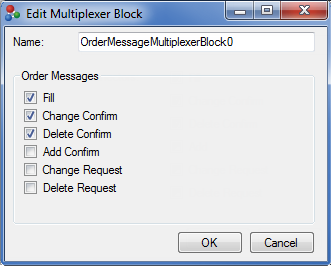