NYSE Liffe is the global derivatives business of the former NYSE Euronext, and is now part of the Intercontinental Exchange Group (ICE). NYSE Liffe was the name given to the exchange previously known as the London International Financial Futures Exchange (LIFFE) when it was acquired by NYSE Euronext.

LIFFE was founded in September 1982, offering futures contracts and options linked to short term interest rates. In 1993 and 1996, LIFFE merged with the London Traded Options Market (LTOM) and London Commodity Exchange (LCE), respectively. With these mergers, LIFFE added both equity options and a range of commodity contracts. In 2002, LIFFE was acquired by Euronext to become Euronext.liffe, which was eventually rebranded as NYSE Euronext and includes several markets: the US derivatives market (NYSE Liffe US), the global derivatives market (NYSE Liffe), and the global equities market (Euronext).  ICE purchased NYSE Euronext, which was the parent company of NYSE Liffe, in November 2013. In 2014, Euronext completed an initial public offering making it once again a standalone company.

Before you can install a TT Gateway, you must work with the exchange to obtain the following connection information:

You must order the Liffe UTP (Base Services) broadcast channels from the exchange. This includes the following channels:

In addition, you must order the correct multicast channels from the exchange.The exchange offers both Single Stream and Grouped Channels.

TT Gateways use the exchange-provided Grouped Channels as listed below:

TT Gateways connect to the exchange via the Universal Trading Platform (UTP).

The UTP consists of the following components:

For a complete description of market data delivery using XDP, refer to Understanding the Price Feed.

For a complete description of order management, refer to Understanding Order Management. 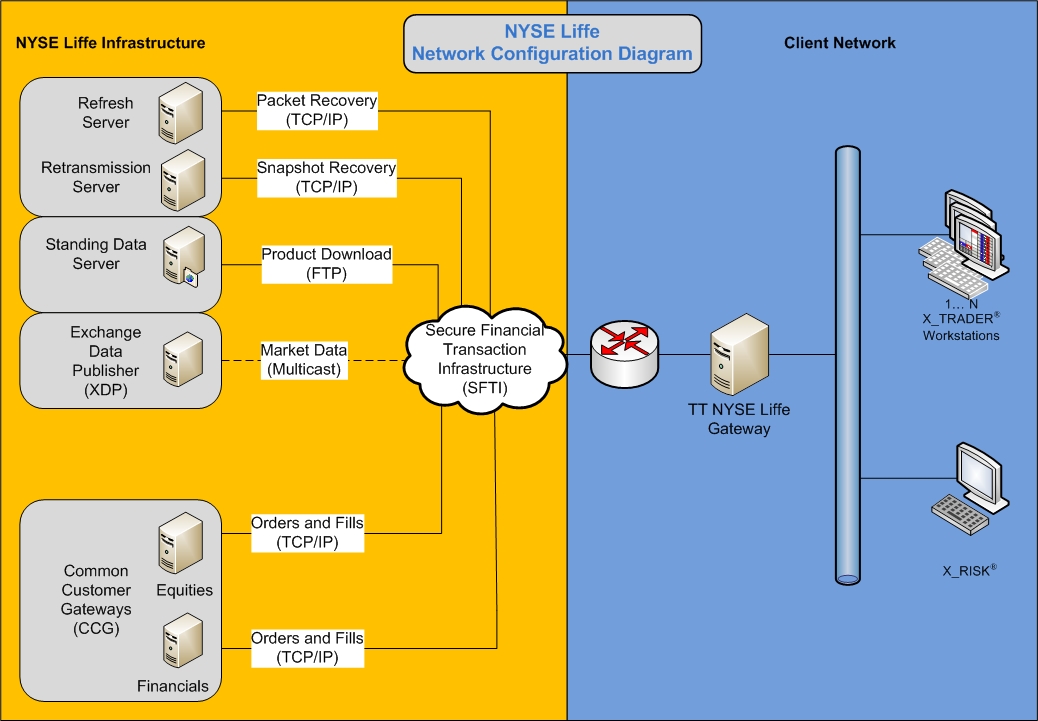 For access to the UTP, clients must obtain a connection to the Secure Financial Transaction Infrastructure (SFTI) network by entering into a Connectivity Agreement for SFTI Services or establish a connection through TTNET.

Liffe’s new data center in Basildon (near London) will house the primary matching engines for all European Liffe and Euronext exchanges.

Liffe matches orders based on one of two algorithms:

Liffe offers contracts based on the following products:

The follow table shows the general trading periods available from Liffe and Euronext. All hours are listed in Greenwich Mean Time (GMT).

The following lists exchange functionality that TT currently does not support: