When a discrete event message

triggers the Discrete Order Block, it submits a “one-shot” order for the specified instrument

at the price and quantity specified by the user (specified by double-clicking on the block).

Recommended Tutorials For This Section

For a tactile learning experience, please try the following tutorial: 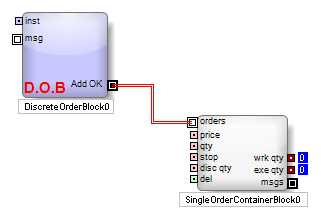 The Single Order Container can only manage a single order at a time. When the container is overloaded with more than a single order, it will forfeit the control of its current order to accept a new one. Such overloading can occur when a Discrete Order Block is triggered by multiple discrete event messages, thereby generating and passing multiple orders to its respective order container.

In order to prevent this undesirable behavior, the user can virtualize the Single Order Container and its respective Multiplexer (see: Virtualization for more information). With this setup, a new copy of the Single Order Container will be generated every time the Discrete Order Block generates and submits a new order. Each copy of the order container will manage a single order with unique price, quantity, and delete condition inputs.

Manually modifying an order controlled by the Single Order Container

If the user manually deletes or modifies an order managed by the Single Order Container, it will relinquish control over to the user, but discrete event messages will still be generated from the appropriate output ports at the expected times. If the user pauses and then resumes the algorithm, the Single Order Container will attempt to re-locate its managed order and re-take control. If it cannot locate the order, the container will simply await a new order. 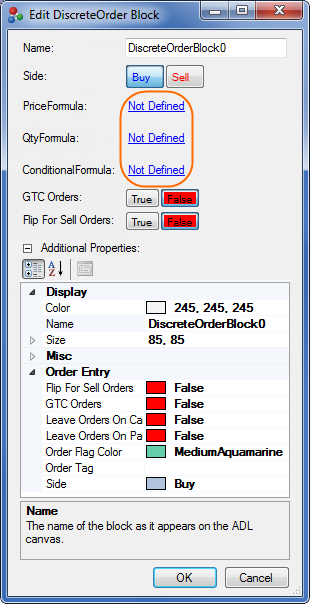