James Bailey, or Yoda as he is known on Twitter, has been a professional trader for 13 years, using TT software for the last 10 years. He started as a local before spending two years working for a fund, trading emerging market FX. He recently returned to his own account, trading short term interest rate (STIR) futures strategies. James spoke to us for this blog post in plain English, but he tweets in character as Yoda while communicating on Twitter. You can follow him there at @JediEconomist.

James: I’ve always had an intense interest in economics since a kid, going on to study it at university. But it wasn’t until I became friends with an old pit trader who suggested I have a look at what they were doing in their arcade in Essex that my love affair with markets started. Looking back at that time, which was the spring after the 9/11 attacks, I focused a lot on learning technical analysis, really trying to understand what was driving market moves. A trader there who I really looked up to—Carrot his name was—he traded FTSE in a bit of size and was having six-figure days. I was in awe of how he read the market and called the moves. But, looking back, the trader who inspires me most now was Wilboy. He was an ex-milkman turned floor trader. He couldn’t explain anything he was doing but he constantly made money. The stories of how he was once dragged out of the trading floor by security as he bought his own stop was the stuff of legend. But at the time, I ridiculed him; it seemed like he was trading a random walk and he was always stressed. But the secret to his success—if you could bottle that, put it in a book and sell it, you’d make a fortune. There is nobody I know who has been as consistent as that man over the years I knew him. And the secret to his success? It was nothing more than pure gut instinct and balls of steel. The stuff you can’t teach. Now, in my darkest days, when the markets are winning, I always remember Wilboy. I tell myself, “If he can do it, I can do it.” 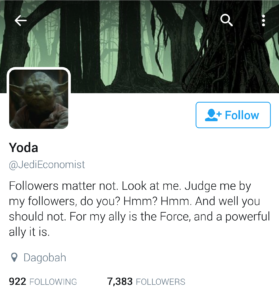 James: Social media, without a doubt. Not only is it now an indispensable tool to understanding market sentiment, it also allows me to connect with people who 10 years ago I would never have imagined being friends with. The truth is, I’m not really Yoda. I’m an Essex lad. But through social media and Yoda, I’ve been able to make the most amazing friends. We have regular Jedi Council Meetings at the Mos Eisley Cantina (a pub in The City) where we attract some of the finest minds in economics, such as former central bankers, chief economists, independent thinkers, journalists and bounty hunters. And all because a glove puppet from a 1970s sci-fi film has opinions on the world that they find interesting. What’s not to love about social media?

Do you have customers or do you trade for yourself?

James: I trade for myself, stirs mostly, but I spent a couple of years in 2014-2016 working for a fund trading an arb strategy using NDFs. The opportunity fell into my lap, and I really enjoyed it. But like most good strategies, it was ironed out by the market, so I’m back in interest rates now on my own account—and loving it. This uncertainty that Trump and Brexit have injected is a welcome relief after many years of ZIRP!

What are your top three requirements in a trading platform?

James: The ability to take a close look at the order book is essential. Stability in a fast market, no freezes. And of course…being able to add lightsaber noises for when I get a fill.

Bloomberg featured an article on you after you “divined a poll” during the Brexit campaign and moved the pound, what happened there?

James: I’d love to be able to say I’d made money out of that one, but unfortunately I didn’t. I traded it really badly and didn’t consider the poll to be as important as the market obviously believed it was. I just got lucky. A website that was releasing a poll crashed, but I sat clicking refresh and got lucky and saw the page. Nothing more glamorous than that. I thought it was probably best to tell the world what the poll was, and it caused quite a kerfuffle! Twitter went crazy—there was a bit of a witch hunt as the pound fell out of bed. I think a few guys were on the wrong end of it, and journalists took an interest. When the poll results were finally released and Yoda was right, well… That was a fun day! After that, during the Asian hours I had weird algos following my Twitter account, and I was getting millions of impressions on my tweets. I think the algos were constantly refreshing Yoda looking for the inside scoop. Fun times, but not as fun as the night of Brexit though. Maybe I’ll tell you about that one another time as I think we’re out of time here.