On the Oil-Gold Ratio: Why Oil’s Going Higher

The following is a guest post authored by Steve H. Hanke (Twitter: @steve_hanke). He is a professor of applied economics and co-director of the Institute for Applied Economics, Global Health, and the Study of Business Enterprise at The Johns Hopkins University in Baltimore, a TT CampusConnect™ partner school. He is a senior fellow and director of the Troubled Currencies Project at the Cato Institute.

This post was originally published on the Cato Institute blog. At the time of publication in September, Steve was predicting crude oil futures would be priced around $45-46/bbl in mid-November. The market appears to be confirming his projections, with CLZ6 closing yesterday at $48.03.

A big story to come out of the last G-20 summit was that the Russians and Saudis were talking oil (read: an oil cooperation agreement). With that, everyone asked, again, where are oil prices headed? To answer that question, one has to have a model–a way of thinking about the problem. In this case, my starting point is Roy W. Jastram’s classic study, “The Golden Constant: The English and American Experience 1560-2007.” In that work, Jastram finds that gold maintains its purchasing power over long periods of time, with the prices of other commodities adapting to the price of gold.

For example, if the price of oil slumps, the oil-gold price ratio will collapse. In consequence, exploration for and development of oil reserves will become less attractive and marginal production will become uneconomic. In addition to the forces squeezing the supply side of the market, low prices will give the demand side a boost. These supply-demand dynamics will, over time, move oil prices and the oil-gold price ratio up. This is what’s behind the old adage, there is nothing like low prices to cure low prices. 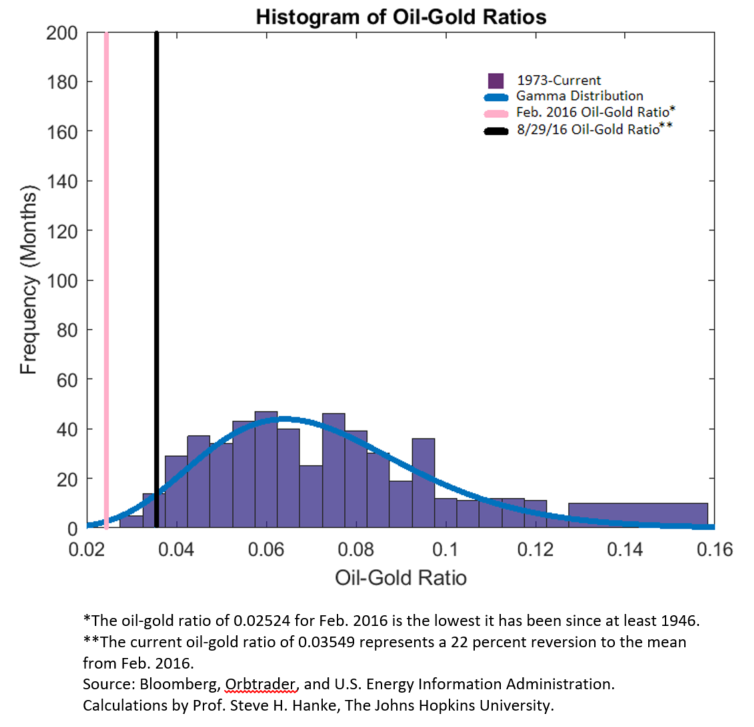 We can calculate these ratios over time. Those ratios are presented in the accompanying chart, starting in 1973 (the post-Bretton Woods period).

Two things stand out in the histogram: the recent oil price collapse was extreme–the February 2016 oil-gold price ratio is way to the left of the distribution, with less than one percent of the distribution to its left. The second observation is that the ratio is slowly reverting to the mean, with a September 2016 ratio approaching 0.04.

But, how long will it take for the ratio to mean revert? My calculations (based on post-1973 data) are that a 50 percent reversion of the ratio will occur in 13.7 months. This translates into a price per barrel of WTI of $60 by March 2017–almost exactly hitting OPEC’s sweet spot. It is worth noting that, like Jastram, I find that oil prices have reverted to the long-run price of gold, rather than the price of gold reverting to that of oil. So, the oil-gold price ratio reverts to its mean via changes in the price of oil.

The accompanying chart shows the price projection based on the oil-gold price ratio model. It also shows the historical course of prices. They are doing just what the golden constant predicts: oil prices are moving up. That said, there remains a significant gap between the January 2018 futures price of WTI, which stands at $51.50/bbl and the implied price estimate of $70.06/bbl which is generated by the oil-gold ratio model. Best to be long oil. 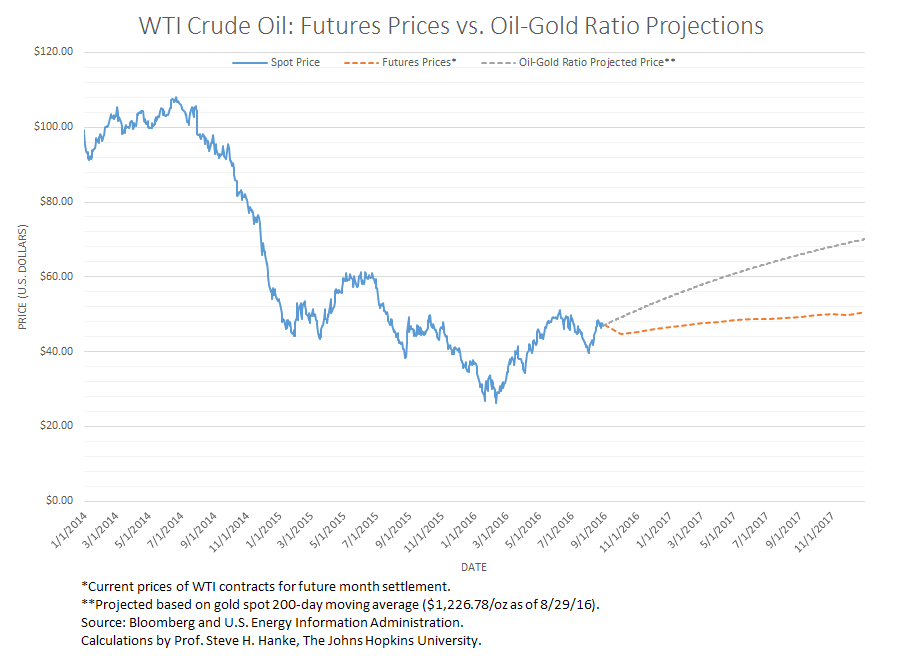