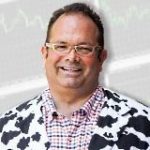 Scott Shellady has a broad, strong range of technical and trading experience in both commodities and financial products focused on North America, Europe and Asia. He has been involved in the futures industry since 1990, with time spent at Prime International Trading London, Speer Leeds and Aubrey G. Lanston Futures. After 11 years in London, Mr. Shellady returned to Chicago to run a small family futures and options business that was started over 50 years ago. Currently, he serves as an adjunct finance professor of finance at DePaul University and an SVP at TJM Brokerage in Chicago, where he can frequently be seen wearing his trademark “cow jacket” on CNBC, Bloomberg, CNN and Fox Business News. In addition, Mr. Shellady is deeply involved with the launch of his new website, Windy City Trader, a warehouse of trader tips, market analysis and webinars. Follow Scott on Twitter at @ScottTheCowGuy.

Scott: Back in the early 1960s, my father, who was also a trader, bought an 800-acre dairy farm in northwestern Illinois. My father chose to wear the cow-print jacket on the trading floor because he wanted to advertise the fact that he was a user, a producer and a middleman. Growing up, I spent a great deal of time with my father and siblings on the family farm. During this time I learned to bale hay and even witnessed cows give birth. My father has retired from trading and has been diagnosed with Alzheimer’s, but I still carry on the legacy of the cow-print jacket and the message my father wanted to get across: “We have a viewership in the open outcry, and I wanted to advertise this and remind these guys when they were trading that it was not just some sort of casino in Vegas.”

But one thing is for sure: I get attention, although I don’t think it necessarily helps me in the trading pits, which can get extremely loud and rowdy. I have the ability to yell and scream. If you’re loud and have a good jacket, that definitely helps—it won’t hurt you at all. I can’t give the jacket all the credit, but it definitely enhances it.

Do you have a specific trading event or date on the calendar that you remember because of a big win or a big draw-down?

Scott: Yes to the first part of that question, and, unfortunately, yes to the second. My first was the mini-crash of 1989. Then came my first busy summer market in 1990 on the floor of the CBOT trading corn options. That is where I cut my teeth, and there were a few days in there where my teeth definitely cut me! The European currency crisis of 1992 also gave me grey hair. I had a big position on in London when Nick Leeson took down the Queen’s bank—Barings Bank. That was not good, and I didn’t see that one coming. There has been a lot of ducking and diving over the last 30 years for sure.

Scott: Learn to harness technology. The landscape has shifted so dramatically that the old way of doing things (and that could be last year at this rate) changes so quickly. Learn about programming, and then learn about the power of programming—i.e., how it can enhance your business today. To some degree, we are in the “wild, wild west” of automation.

What is the next big thing in trading? Analytics? Virtual reality? Artificial Intelligence? Something else?

Scott: Machines are already teaching themselves to learn and trade. They have been a tremendously deflationary force in the business. Artificial intelligence and machine-based logic are absolutely where things are heading.

Are there any interesting trades out there now you want to talk about?

Scott: In a macro sense, the President is struggling with what I call the great unanswerables: