Speaking In Code Part 1: The Female Perspective on Life in Technology

As head of HR at TT, I like to think we make a concerted effort to stay on top of important workforce issues in the news, whether those topics have surfaced at TT or in the greater tech industry. And one of the biggest topics of debate right now, at least in our industry, is that of women in tech. Or more specifically, the lack of women in the technology industry, particularly in engineering and leadership roles.

Much of the news is negative, unfortunately. In the past few months alone, you haven’t had to look hard to find discouraging headlines, whether on a national scale (Why are women leaving the tech industry in droves?) or specific to Chicago (1871 won’t launch delayed women-in-tech vertical as an incubator). Of course, most working in tech probably don’t need a headline to tell them that—just by doing the “eye test” at industry events, it’s easy to see that women are vastly outnumbered.

But it’s not just about numbers, either—it’s about whether if we, as an industry, see women as equal to men. With Techweek Chicago approaching, we’re reminded of last year’s controversy, when the conference sent out invitations deemed to be sexist and emblematic of the problem by many in the community. It could be a chicken-or-egg question, determining whether a sexist culture has developed because of a lack of women, or if that culture has in fact led to the lack of women. It may be a bit of both, but either way it’s an issue.

That said, there is good news too. Last month, Crain’s highlighted ThoughtWorks, a Chicago-based company that has found a great deal of success with women in technical jobs. I recently had a great time at the ITA Women in Tech Poker Night, where I met many women making a difference in Chicago tech, and I read this inspiring piece on Sonja Khan, who is interning at Facebook this summer and loving computer science.

Additionally, the fact that the media is covering the disparities in the industry is a positive in itself—after all, in order to solve a problem, it first needs to be recognized as a problem. But even with these small victories, it’s clear the industry can do a lot better. 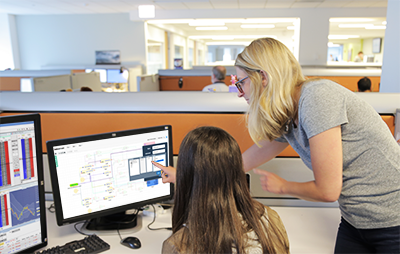 And that includes us too—TT is not yet where we want to be. But we know the value of a diverse workforce, and we recognize that companies must take an active role not just in giving female technologists a chance, but in creating a culture that will allow them (and anyone) to thrive. There’s still work to be done, but we’ve made great strides on both fronts in recent years, and we want to take an active role in making that culture of inclusivity a reality.

As such, we’re beginning a monthly “Speaking In Code” segment this summer. We’ll be posting Q&As with talented women at TT, talking with them about their paths through the industry, their recommendations for the next generation of female technologists and more. We hope this will encourage others to view technology as an appealing, interactive, cooperative and energetic field versus the “isolated, heads down, introverted role” we once believed it to be. Please keep an eye on Trade Talk for those posts over the next few months, and certainly feel free to share with me your thoughts on this post.

Equality of opportunity is vitally important in our industry, and it’s something I am—and TT is—passionate about. Sharing these stories is a small step, but one that we hope will inspire more people to join the conversation.