When Is a Long Shot a Good Shot?

I’d like to go through a trade we recently had on. This will make the concept concrete.

The idea of expected value is relatively straightforward: one must combine the probability of a financial event occurring and its outcome. For example, consider an investment where there’s a 25% chance of losing $10 and a 75% chance of making $10. Multiply the outcomes by the probabilities to get the expected value. In this case, 0.25 x -$10 + 0.75 x $10 = $5. That’s easy enough.

The tree of possibilities.

Would you play that game? You likely would.

These are the fun questions and what we, as a trading group, need to be asking ourselves implicitly or explicitly all the time. Very much at the center of this is one of the terms that we use frequently in TradeCo: fair value. The idea of fair value is that there is some sort of equilibrium or theoretically sound price for something. In this case, the fair value of our thought experiment bet is $5. In theory, we ought to be willing to play that game for less than $5 and sell the opportunity to play the game to others at more than $5. In reality, of course, we need to account for uncertainty, transaction costs, overhead and a desired profit margin.

The Federal Reserve Board sets overnight interest rates via their effectively unlimited coffers. They announce for all to hear their decision on where these will be set at their meetings that are spaced around a month and a half apart. The schedule can be found online. The last meeting was March 16 and the next one is April 27.

The current interest rate target for the Federal Funds market is 25-50 bp (0.25-0.50%). As an inter-bank market, only banks are eligible to buy and sell loans in the Fed Funds market. Although the market fluctuates, it is typically right around 35-40 bp with some seasonal variations (due to reserve requirements every two weeks). The CME has a futures contract on the Fed Funds market. Unlike many other contracts, the Fed Funds future settles at a level equal to the monthly average of the cash market. So if the Fed decides to change rates mid-month, it will only impact the calculation of the average for the part of the month after the meeting.

Just before the last Fed meeting, Fed Funds futures prices looked something like this:

As it was already March 16 for these prices, the first pure play on the Fed tightening at that meeting was April. It seems reasonable to think that given the current target of rates as being 25-50bps, April would trade similarly, if not exactly, to March if there was no move in interest rates. March was already trading 9963, i.e., the target funds level (technical minutiae not really necessary: if March was factoring in a move, the futures should have been trading a bit lower as there were still two weeks left, so maybe the prediction for the post-announcement should have been 9964 or a little higher but the current Fed Funds target of 37.5 basis points indicated a price below 9963 anyway). On the other hand, if the Fed tightened 25 bps, then the new range would be 50-75 bps or about 62.5bps. That corresponds to a price of 9937.5. Clearly, the Fed Funds market was not pricing in a move by the Fed at the March meeting. 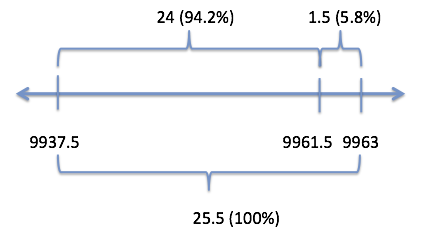 The backdrop to this is that markets had come roaring back after selling off due to a deflation scare that was motivated by crude oil’s aggressive sell off and its knock-on effect of causing issues in the high yield market by companies tied to oil prices. Crude oil had rallied back to the high 30s, stocks had come back and junk bonds had come off of their lows. In addition, jobs data had been robust, inflation figures were not looking deflationary, and both the Bank of Japan and ECB had just eased policy so that the Fed had room to tighten. Finally, the projections of the Fed themselves pointed to 3-4 tightenings in 2016 with this being the end of the first quarter and an election year in which it is generally thought that the Fed does not want to be making moves that might seem politically motivated.

Wait! You are betting on something that even you don’t think will happen!

It seems a crazy thing to do. Yet that is what a positive expectation demands you do. That’s the whole point behind the concept of focusing on process instead of outcome. If the only positions one took were those that had a majority probability of happening, then opportunities would be limited and, worse, my ability to earn outsize returns would be nearly eliminated. After all, it’s hard to find good odds on situations where the conventional wisdom or the most likely outcome is what is priced in. Recall what Warren Buffet said: “Price is what you pay. Value is what you get.” In this case, in a real sense, the price itself was creating the value, and it was good.

It is not a bad thing to bet on an unlikely outcome so long as it is priced appropriately. Priced appropriately merely means that the probability-weighted payoff—the expectation—is positive. It works even better when one can create a portfolio of many positive expectation positions. Consider the position prior to the Fed announcement. If the probability truly was 20%, then if I were able to place this position five times, I should win once. (Note: this, of course, is not true as it is a random process and the outcome may be any number of “wins” from zero to five.) If that occurred, my cost would be: lose 4x @ 1 tick per loss; win 1x @ +25 ticks. That’s an outcome of +21 ticks!

Conversely, it’s a terrible idea to pay too much for a likely outcome. Although it may pay off more often than not (that’s the most likely outcome, after all), profitability will be eroded. Over time, when there is a surprise and a less likely outcome occurs, there will be an insufficient profit cushion to appropriately pay for the loss. Consider the reverse of the Fed Funds futures position. There is an 80% chance of success each time, but the four-tick gain is unable to compensate for the 25-tick loss. Had the opportunity been priced for the probability, then the gains would have exactly offset the losses.

Of course, there are some tough issues to tackle here. Probably the primary one is that the probabilities are unknown. Note that while we may not know an exact probability, it is often possible to construct a range of reasonable probabilities, which is the approach used above. A second issue is that quite unfortunately, there isn’t a steady stream of mispriced, cheap long shots to ensure that at some point there will be a positive payoff.

As it turns out, the Fed didn’t raise rates. The good news is that TradeCo happened to get some good fills getting the trade on, and there was time to get out at 9963. The outcome was not what I wanted. But it was a good trade. And I will continue to focus on the process—to accumulate as many positive expectation trades as possible. If I focused on the outcome, then I would take away from this a loss of one tick. And that is exactly the wrong lesson to learn.