One of the most interesting aspects of supporting a product like TT’s Autospreader® is the fact that users continue to find new ways to use it, especially as market conditions change. While it would be impossible for me to talk about the countless number of unique strategies that are created for specific markets,  I can give you a good idea of how Autospreader can be applied by looking at how it’s used to execute some common arbitrage spreads.

My intention is not to portray these strategies as potential sources of profit, but to portray them as stepping stones to further innovation. I hope that these examples will “get your wheels turning.” Even if you’re already familiar with these spreads, this blog can serve as a good review of Autospreader.

What is an arbitrage spread?

An arbitrage spread trade is an attempt to profit by exploiting price differences between identical or similar products, on different exchanges or in different forms.

The appeal of arbitrage trading is that it is intrinsically less risky than other forms of spread trading because you are not taking an opinion on the market rising or falling. An arbitrageur simultaneously buys one contract in a market and sells an identical or similar contract in another market attempting to profit from small price discrepancies between these identical or similar contracts.

Although there are many different product combinations that can comprise an arbitrage trade, some of the more common strategies involve two futures contracts where the underlying product is the same, but the contracts are traded in different units. Let’s take a look at two popular examples.

In this example, we’ll look at a spread trading strategy involving hard red winter (HRW) wheat futures against the soft red winter (SRW) wheat futures that both trade at the Chicago Mercantile Exchange (CME). These are very similar products, but they aren’t perfectly identical because each represents a different grade of wheat grown in a different part of the U.S. Nevertheless, there is often a high degree of price correlation between these two different wheat products. Both contracts have the same contract size of 5,000 bushels, and they both tick in quarter-cent increments at $12.50 per contract.

Some of the factors affecting this type of spread are the overall production, international and domestic demand, and crop production quality. Also, the independent growing areas for these two wheat products offer an opportunity by taking advantage of drought, flooding, wind damage, planting and harvest problems in one contract while the other contract reacts to comparable—or in some cases completely different—conditions.

Wheat spreads tend to follow historical price patterns and price ranges going back many years. Historically, HRW wheat has traded at a premium to SRW wheat due to its grade and delivery specifications. When HRW wheat was priced below SRW wheat, there would be buying interest in HRW wheat while selling occurred in SRW wheat.

An Autospreader configuration can be created using the following parameters:

A “strip” consists of a simultaneous purchase or sale in one transaction of four or more consecutive futures contracts where the quantity in each leg can vary. A “pack” is similar to a strip trade, except the quantity is the same in each leg. A “bundle” consists of a simultaneous buy or sell in one transaction of futures contracts starting from the front month and going out two or more years where the quantity is the same in each leg. Strips, packs and bundles are commonly used in trading interest rates and energy futures.

Exchange-listed strips, packs and bundles on the CME Eurodollar are typically quoted on an average net change basis from the previous day’s settlement in one-quarter increments. The spread price display will reflect the average net change of the net price changes of each spread leg.

In this example we’ll create a spread between an exchange-listed pack and the synthetic pack where the strategy will attempt to profit by exploiting price differences of the two entities.Trading a synthetic version of this exchange-listed pack spread can provide traders with more opportunity because Autospreader quoting orders could have priority over exchange implied orders, and they can potentially receive more fills.
Buy one synthetic CME Eurodollar pack:

The Spread Ratio of “1” for each leg is self-explanatory. The Multiplier of “0.5” for each GE leg is the minimum tick increment of each leg, and this is needed to convert the GE legs into net change.

Note that each leg’s net change is actually reported in ticks. Therefore, to convert the net change into a regular price format, we need to multiply by the minimum tick increment of the given leg. Also note that the sum of the net change across four legs is divided by four to obtain the average net change:

Notice that this spread formula is a combination of addition, subtraction, multiplication and division as well as different computations for the legs of the spread.

Using the new Custom formula feature in X_TRADER® 7.17 allows you to configure a custom spread formula using standard arithmetic operators when Custom is selected in the Based On field.

As you type your spread formula in the Customer formula field, the IntelliSense-type function automatically populates a list of available parameter settings that can be applied to the formula. For example, press the period key on the keyboard to display a list of the available parameter settings that can be included in the formula for a given leg. 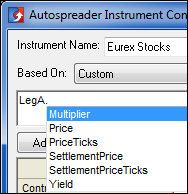 Along with the IntelliSense-type function, there is a periodic check and visual indication of the validity of the current arithmetic operation so that errors can be quickly corrected.

The Custom formula is very intuitive and easy to use, and allows users to create any variety of spread combinations and strategies that were not possible with previous versions.

I hope these examples gave you some insight into potential ideas and opportunities for further exploration. With more than a decade of history behind it, Autospreader has evolved and will continue to evolve with user-driven innovation. Above all, however, it will continue to deliver flexibility for users like you to exercise creativity.

To learn more, please see the TT website and the dedicated page for Autospreader, where you will find a wealth of information on both basic functionality and more advanced features.