Guess What Day It Is! It’s FOMC Day!

Here we are again. Just when we all thought we had it figured out, the election whizzed on the electric fence. Now it is time for the long awaited December FOMC meeting. I’ve written before about positive expected value and a process focused trading discipline. Focusing on the process, i.e., the positive expected value, rather than the outcome enables one to take on asymmetric payoffs with positive expectation even when the payoff is unlikely. Right now, we are heading into this meeting, and the market is pricing the likelihood of a tightening at near certainty. Count me in on expecting a rate hike, but if you have learned anything this year, it should be to expect the unexpected. 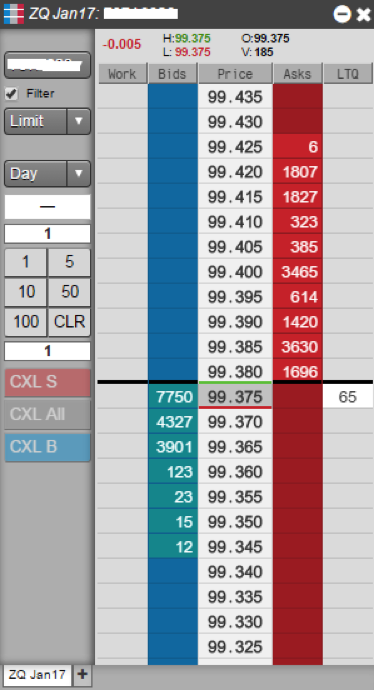 First off, let me explain that I’m looking at the Jan Fed Funds contract because of the unique nature of the contract. Unlike most futures, FF is an average price contract—the average level of Fed funds trading for the entire month. I chose January because that is the first month that has the entirety of any rate rise in it and the next FOMC meeting is in February. It is a pretty pure measure of whether the Fed raises or not.

The contract is trading 99.375-99.38, which equates to an average funds rate for the month of January of 62 bps on the offer side. Right now, the Fed target is 25-50bps, and if they tighten 25bps, that would take it to 50-75bps, meaning a mid-level of 62.5bps. Going through the math: 24.5 bps / 25bps = 98% priced in. Just to be clear, there is uncertainty here if for no other reason than the Fed Funds average could trade high or low relative to the Fed target during January. That means that if you want to trade on the side of the Fed tightening, you are giving the market 24.5:1 odds.

Let me yet again argue for taking the side of uncertainty on a very asymmetric profile. To be clear: I believe that the Fed will, in fact, raise rates. Yet I also know that to think that is 98% certain for this Fed, at this time, is misplaced confidence. As I write this, it is November 17. The FOMC meets December 14. Needless to say, quite a bit can happen in a month. Only eight days ago, there was a bit of an election surprise and market mayhem—maybe you noticed?

“There are decades where nothing happens; and there are weeks where decades happen.”

The most important part of this trade is that I don’t need the Fed to pass on tightening to make money. That would make it spectacular, of course, but only if I hold the trade that long. The point is that I am trading on the odds as they are given at this moment. If the odds change between now and the event, I am not tied to the position. That’s the beauty of being a trader and not a pundit. I don’t need to handicap the event; I am handicapping the market’s handicapping of the event. It is mispriced right now, and if that changes, then I change the position. If the market perception of Fed tightening changes from 96% to, say, 75% or 80%, then it makes sense to lighten up or exit entirely. The facts are that there is a lot going on between now and then to get the market nervous. As if, of course, it was not already a bit off kilter.

Here is another way to look at it: if the terminal value can be fixed at 99.375 (this is, at best, approximate), then buying the future can be thought of as an option costing one half to one tick. To rephrase, if I know my worst case scenario is selling 99.375, then buying 99.385 is like purchasing an option for one tick. Between now and the FOMC meeting (or really until January), I’ve bought an option on the market either repricing odds lower or the Fed not tightening if it is held that long.

I should add some caveats about all of this. First, of course, this is not trading advice. It is merely my interpretation of what the market is dealing right now. Second, my calculations may be incorrect. Consider that if the Fed tightens, the market may overreact or alternatively might price the market to a rate higher than 62.5bps (the mid-point between an expected 50-75 bps range). Or, of course, the Fed may tighten more than 25 bps.

Let’s review a sampling of reasons for an odds repricing:

That’s enough for me. All I see is opportunity in a contract that is priced to perfection in a world far from perfect. What could go wrong? Just ask Hillary.

*Thanks to my colleagues who (again) provided great feedback.