The following is a guest post by Christopher Rodriguez, chief marketing and relationship management officer of Eris Exchange, and Geoffrey Sharp, Eris’ managing director and head of sales. Eris is a U.S. futures exchange that offers listed interest rate swap futures. Trading Technologies offers connectivity to Eris through both the TT® and X_TRADER® platforms.

Some traders were more prepared than others for the results of the U.S. presidential election in November. Higher implied volatility, changes in risk premium and increases in interest rates resulted from Donald Trump’s surprise victory. Equity markets plunged then rallied. All told, the month of November was remarkable for traders.

Heading into Thanksgiving, 10-year Treasury Note Yields reached highs not seen since the middle of 2015. The bond sell-off tapered toward month-end, but the forwards predicted a more aggressively rising rate environment. 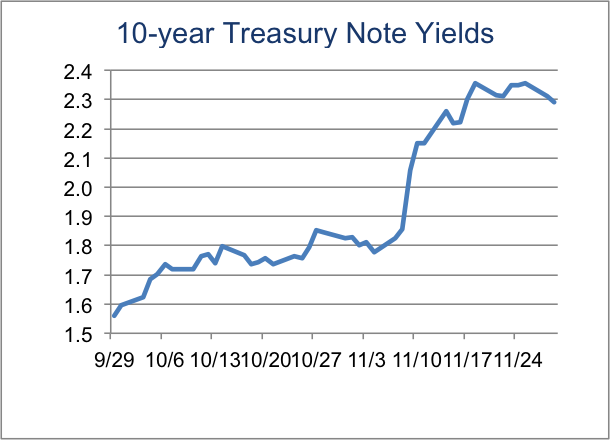 Some economic outlooks point toward fiscal policy changes that may positively impact economic growth and lead to a continued rise in interest rates. At the same time, some believe the risk remains that global markets underperform and drag on U.S. markets. Specifically, U.S. Treasuries will be appealing to foreign investors, causing prices to rise and rates to fall. These competing influences may cause an ebb and flow in rates not seen in almost a decade.

The CBOE Interest Rate Volatility Index (SRVIX) illustrates the expected increase in overall rate volatility as it has spiked to recent highs since the election. 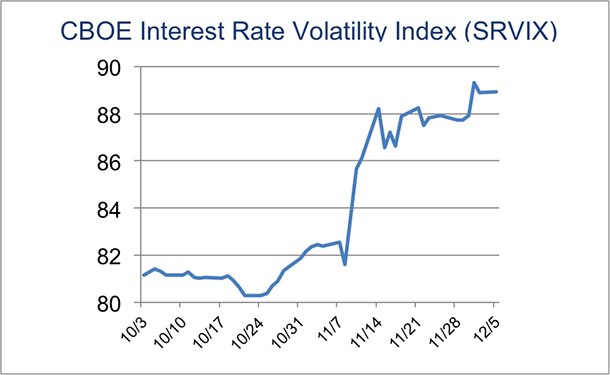 As a direct result of recent shifts in expectations, we’ve seen trading records set across futures markets. CME Group announced an average daily volume (ADV) increase of 52% in November 2016 versus November 2015 and all-time highs in futures open interest of 117mm contracts on November 23, of which 69mm contracts were in the interest rate complex (also a record). Eris Exchange recorded an ADV increase of more than 70% in November 2016 versus November 2015, and the low two-day margin Eris Standards set an open interest record of 133,220 contracts on November 30. These recent records can be attributed to market volatility following the election, as well as secondary factors like permanent market structure changes caused by the continued global roll out of BASEL III banking reforms.

Expectations of fiscal easing are already having a major impact on U.S. rates, which are reflected in cash markets, Eurodollars, Treasury futures and swap rates. As the market wrestles with the uncertainty surrounding fiscal stimulus and the possibility for wide-ranging tax cuts by a Trump White House and Republican Congress, expectations of rising inflation and budgetary pressures could lead to continued volatility in the near and intermediate term. Interest rate trading could pick up among both speculators and hedgers, positively impacting both CME Group and Eris Exchange markets.

The combination of competing factors at play, including the uncertainty surrounding decisions that will be made by a Trump administration, will likely result in healthy trading volatility and will necessitate increased rate hedging. Indeed, the zero interest rate policy in the wake of the financial crisis has already come to an end, and now looks to be reversing course more quickly than expected.

While many market participants cut their teeth trading rates before the financial crisis, others began their professional trading lives after 2008 and have only operated in an environment where low rates have been the norm. This new generation of traders has the tools and analytics offered through TT and ADL® to help them seek out new opportunities to trade rates, and accelerate their use and adoption of listed interest rate futures including swap futures to hedge risks posed by the pending market volatility on the horizon.