Rob Wherry, MBA student, and Michelle Golojuch, finance and accountancy major, track a stock on a Bloomberg terminal in DePaul’s Finance Lab. The virtual trading room contains the latest in high-tech trading, investing and finance software.
The statement from the Federal Open Market Committee (FOMC) meeting in January had barely been made public before DePaul University finance student Arman Hodzic saw the reaction in the markets. Hodzic watched in real time as the Standard & Poor’s 500 Index and the yield on the 10-year Treasury reacted to the news.

Traders and investors were responding to the Federal Reserve’s statements on monetary policy. Prior to the announcement, Hodzic and his partners, fellow undergraduate students Alex Netzel, Dhruvish Shah and Brendan Newell, used Trading Technologies ADL® (Algo Design Lab) to create an algorithm that would take long positions on the market and hopefully earn them virtual profits.

Hodzic and his team used specially engineered keyboard terminals created by Bloomberg L.P. to access real-time market data to see the pendulum-swinging Treasury yields and the S&P in vivid charts, graphs and numbers.

They waited patiently, watching the “iceberg” algorithm they created execute automatic trading actions. At the end of their trading they had a simulated $33,000 profit.

“The market was acting really wildly and we profited off that,” says Hodzic. He was one of about 40 students enrolled in a “Money and Banking” course who participated in the simulated trading event at DePaul on Jan. 28. They experienced firsthand how announcements by the FOMC, a Federal Reserve committee charged with setting monetary policy, can precipitate a flurry of investment and trading activity.

Though the trading event was a simulation, its benefits were real to students. The Trading Technologies software and algorithmic trading tools Hodzic and his classmates used are the same ones used by professionals who work in the finance industry.

The Bloomberg terminals Hodzic used to monitor the U.S. markets are similar to the Bloomberg terminals used by hundreds of investment firms nationwide. And all of this technology can be found in the Driehaus College of Business’s Finance Lab, a virtual trading room on the 5th floor of the DePaul Center on the university’s Loop Campus. Hodzic says the trading simulation imbued his textbook lessons with life.

“It was like being in a real trading room,” Hodzic says. “It’s experiential learning. It’s way different than sitting in a class, taking notes, and reading from a PowerPoint. You’re actually in front of a computer that shows you what’s going on in the market. You can benefit greatly from the teacher and the technology in this room.” 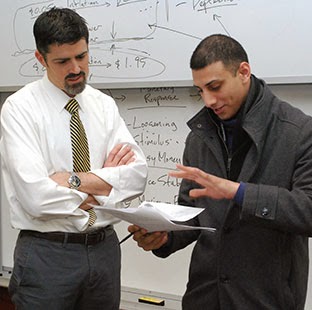 “Students need to be familiar with the technology for their careers,” says Carl Luft, associate professor of finance and academic director of the Arditti Center for Risk Management. “That room provides the tools for students to put them in the best possible position to succeed.”

Investing in the future

The idea for a virtual trading room at DePaul actually began decades ago, says Luft. That’s when the former chair of the finance department, Geoffrey Hirt, envisioned a classroom that would include the day’s latest technology.

The first iteration was half the size of the current Finance Lab. The lab now includes 30 dual-monitor terminals, each with Trading Technologies X_TRADER® trading software installed, plus 12 Bloomberg terminals and multiple subscriptions to a host of finance and investment management software and services including Morningstar, Reuters and Wharton among others.

Eight of the Bloomberg terminals were recently added thanks to a generous gift from the Keeley Family Foundation founded by John L. Keeley Jr., president and chief investment officer of the Chicago-based Keeley Asset Management Corp., and his wife, Barbara.

Rob Wherry, an MBA student seeking to make a career change from journalism to finance, uses the Bloomberg terminals in an investment seminar course taught by Associate Professor Finance Vahap Uysal. The graduate and undergraduate students in the class mine data on the Bloomberg terminals to manage a $500,000 portfolio of stocks.

“The depth of information you can get off the terminals is unparalleled for students,” says Wherry. “For example, I was just recently doing a lot of work on the energy industry, specifically about oil prices, and I could go to the terminal and quickly find historical prices, current prices, future prices, rig counts, production levels by country, acquisitions. If I didn’t have the terminal, I would likely have to go find sources for each and all of those data points, which probably would have added a day or two onto my research time.”

Currently, there are 13 classes using the Finance Lab as a base for learning. While many use it for simulated events, such as the one that occurred in Black’s class, other classes meet in the lab to do real investment portfolio management.

More than 1,200 students used the technology in the spring quarter of 2014 alone. Students—both undergraduate and graduate—in a variety of disciplines, from finance to mathematics and economics, have the opportunity to learn the software and use the lab’s sophisticated tools.

In the course “Applied International Portfolio Management,” graduate and undergraduate students learn the ins and outs of international markets while managing a $100,000 music student scholarship endowment. Finance students use the Bloomberg terminals to do everything from valuation of companies, to comparative analysis of stocks vs. industry performance.

Though students don’t make any trades—that’s done by a licensed professional—they make the decisions that affect the portfolio’s growth or decline. The portfolio includes industries and companies solely in Europe, Africa/Middle East, Asia/Australia or Latin America.

Students enrolled in another course, “Fundamental and Technical Currency Trading,” participate in managing the “M Demon Fund.” Set up by adjunct finance professor Leslie McNew, a 25-year veteran of the markets, with her own money, the fund is managed by students. It provides students with an opportunity to learn how to manage a portfolio and trade stocks in foreign exchange markets.

“In most other classes, you are talking in generalities about investing,” says Wherry, “But [at DePaul] you are talking about coming up with an idea, finding a stock, researching the sector, defending it in front of your peers and your professor, and then actually putting money behind your idea. I think if you have that on your resume, it sticks out to a possible employer.”

The Finance Lab benefits faculty as well as students. “Having technology makes me a better teacher,” says Luft, who teaches risk management and derivative valuations, among other courses. “Having a room like that where we can use it as a lab and as a classroom makes the subject matter come alive. It’s not esoteric and detached.”

While other finance students across the country have access to Trading Technologies’ software, few have access to the kind of networking opportunities that DePaul can offer because of the business school’s strong connection with, and location in, Chicago’s financial district.

Take Hodzic’s group, for example. The students focused on algorithmic trading, the practice of using advanced mathematical models to make transactions in the financial markets. 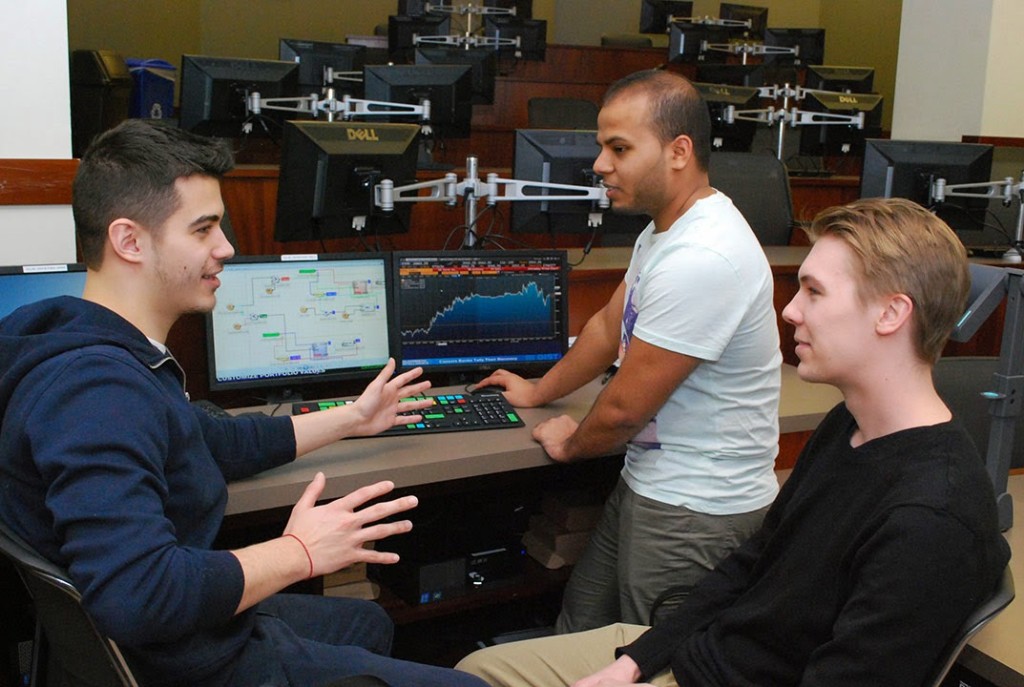 Arman Hodzic, Dhruvish Shah and Alex Netzel discuss changes to the trading algorithm
they created using the Trading Technologies software in DePaul’s virtual trading room.
While Chicago-based Trading Technologies provides its X_TRADER software to dozens of universities around the nation, its proximity allowed DePaul students to gain an insider’s view of ADL, its visual programming platform for algorithmic traders.

And when Hodzic and his classmates wanted to delve deeper into ADL, the finance software vendor extended an invitation to visit its headquarters in downtown Chicago.

“We went to Trading Technologies and it was like going to NASA,” says Newell. “It was the coolest thing. There were monitors everywhere and they gave us a tour, showed us how they built their algorithmic design tool, how it worked and how we can build better algorithms with it.”

Black says the Finance Lab helps to expand his classroom beyond his own expertise.

Though the Finance Lab is already a crown jewel in DePaul’s finance department, its potential to help students learn has hardly been exhausted.

“My vision for the Finance Lab is that it becomes a forum where students and employers can connect,” says Black. “Ultimately, what I would love to do is have local financial services employers in the classroom teaching students what they do, and my role is to connect the dots.”